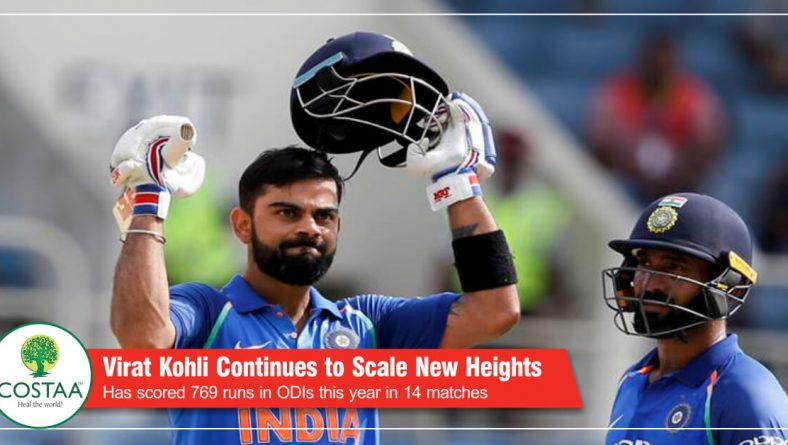 There is no debating that Virat Kohli is one of the best batsmen in the world right now and that holds true in any format of the game. Be it Test matches where he stands comfortably to keep the runs flowing or to hold front; ODIs with steady flow of runs or T20Is where he knows how to keep his innings going and speed up when required. But what makes his performances even more worthy of applause is the fact that he doesn’t baffle under pressure. Despite being the captain of a team considered the best in the world, he is able to not just lead the side but also score runs at free will. Many players in the past and current, are unable to handle both the responsibilities – Kohli clearly has embraced the added work.

One could go back to his remarkable chase against Australia in the World T20 last year where he scored 82 runs to take India into the semifinals and see how seamlessly he added runs to the total and didn’t lose his cool during the process. No wonder the skipper called it his best innings till date.
Moving into the new year, Kohli hasn’t changed even though there have been few off days for him this season. But when it comes to chasing runs, he still continues to be one of the best in the world and the numbers tell the story. He has scored 769 runs in ODIs this year in 14 matches played at an average of 96.12 with two centuries coming in the process. While chasing, he has scored 550 runs in eight innings for an equally commendable average of 137.50 and both the hundreds have come while batting second.

But his true excellence can be highlighted by the fact that Kohli’s average in India wins is a staggering 487! Whenever India wins, Kohli remains unbeaten. And that is not a one off case – it has happened five times this year. The only anomaly being his 122 run knock against England at the start of the year. Later he led the side to wins against South Africa (76*), Bangladesh (96*), West Indies (111*) and most recently against Sri Lanka (82*).